This past week, Sentier Research told us that real median wages were 1.4% higher in December than in November 2014. This increase should be considered significant.

A brief summary of the significance of this increase can be seen in the graphic below (red line);

Income growth is trending in the correct direction (red line in above graphic has been in a general uptrend since mid-2011) – and there is little question that consumers need to drive a consumer based economy – not government or big business.  It seems that the politicos all believe the USA economy is beginning to run on all cylinders, and are lining up to take credit.

The voices that are saying that the economy will be improving this year are looking at the wrong data.  Certain data has a forward look whilst other data is coincident or rear view. What we can say without any fear of contradiction is that the coincident and lagging data says the economy has come a long way since the train wreck called the Great Recession. What we can also say is that trends remain true until they are no longer true – which means you CAN forecast using trends and GENERALLY you will be correct.

I have no crystal ball to accurately forecast – and neither does anybody else. There are so many dynamics in play, and picking the dominant ones that will affect the economy is not possible (unless you listen to the talking heads on the business news channels who are absolutely sure about everything which will be happening next).

The USA has a consumer based economy. Putting money in the hands of the median consumer is a strong positive dynamic for the future – and the reported significant improvement in median income cannot be spun as a negative dynamic. The trends are in the right direction – and as a trend person – trends continue until they do not continue. However, trend people are always surprised at turning points.

The current Econintersect economic forecast shows weakness in the business sector – not recession type weakness but a weakening of the trends. This would offset some of the growth in the consumer portion of the economy.

The global economy is growing weaker by the hour. The latest FOMC meeting statement added this weakness to their list of concerns. The turmoil in the Eurozone is daily fodder feeding the weakness, like dead wood feeding a forest fire.  Based on current economic realities – trade is not a significant enough portion of the USA economy to have any noticeable effect UNLESS:

Note:  Do not underestimate the potential effect of the carry trade on U.S. equities and bonds as long as the ECB and Japan have “raging” QE programs.  With U.S. government debt paying so much more interest than Japan and many European countries at the same time as the dollar appreciates, it is hard to see U.S. securities having a significant decline in spite of unfavorable valuation levels.  Interest rate spreads and currency trends are powerful tailwind forces driving liquidity leakage from the QE countries of origin into U.S. assets.

It is clever and correct to talk about middle class economics – this is the core of the American economy. But the correctness ends when discussion begins on the ways to help stoke the middle class engine. One side of the politicos talks about tax relief to the middle class and the other side talks about less regulation for all. If tax relief were the answer, the economy should have ignited under Bush’s tax relief in 2001 and 2003. If less regulation as the answer the USA would not have had a financial crisis in 2008 where the proximate cause was attributed to deregulation.

Living in developing countries most of my life, the role of small business is obvious in improving the lot of the middle class. What is happening today in the USA can be explained in a single graphic from Gallup: 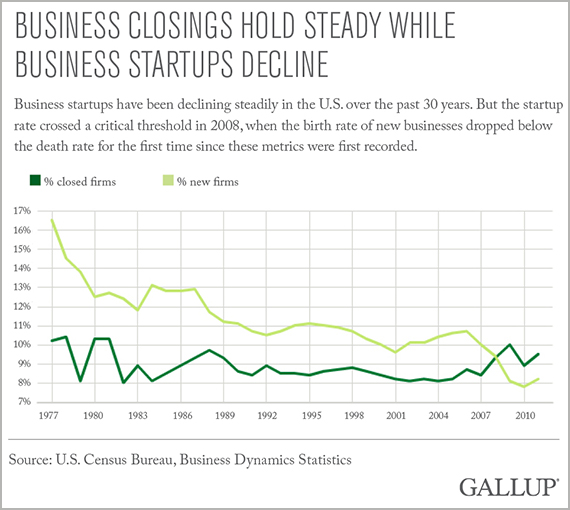 America has become too dependent on government and big business for employment. Small business is the engine of middle class economics. The existing regulations make it very hard for a middle class person to start and run a business. Gallup stated:

If the politicos are correct that tax relief and deregulation are the answers for Middle Class Economics – focus them entirely on small business so we are somewhat assured the benefits go into the correct pocket.