The string of record low initial unemployment claims which began last September may have ended this week. After nearly 11 months at extremes that have only existed before at the top of the internet/tech bubble in 1999-2000 and the housing bubble top in 2006-07, initial claims backed off slightly. The question is whether this is just a temporary blip, or the beginning of economic weakening that in the past two instances of such extreme readings, ultimately led to economic collapse and monetary interventions.

The overheating that has been indicated in the claims data for months has also recently shown up in the JOLTS data. The excesses and distortions are real in certain sectors of the economy. In any bubble economy, when the sectors that are in the most extreme bubbles begin to weaken, it has been only a matter of time until the entire bubble driven economic house of cards collapses.

The headline, seasonally adjusted (not actual) number for initial unemployment claims for the week ended August 9 was 311,000. That was 6,000 more than the consensus guess of Wall Street economists. So they were very close to the mark this week.

The actual numbers, which the Wall Street captured media ignores, shows claims still near, but slightly above the levels reached at the top of the housing/credit bubble in 2006. That’s after 11 months of nearly continuous record readings. Since September 2013 when the number of claims first fell to a record low, the data has suggested that the central bank driven financial engineering/credit bubble has reached a dangerous juncture. If this is the beginning of a movement away from those levels rather than just a blip, then it’s likely to be the beginning of the end. 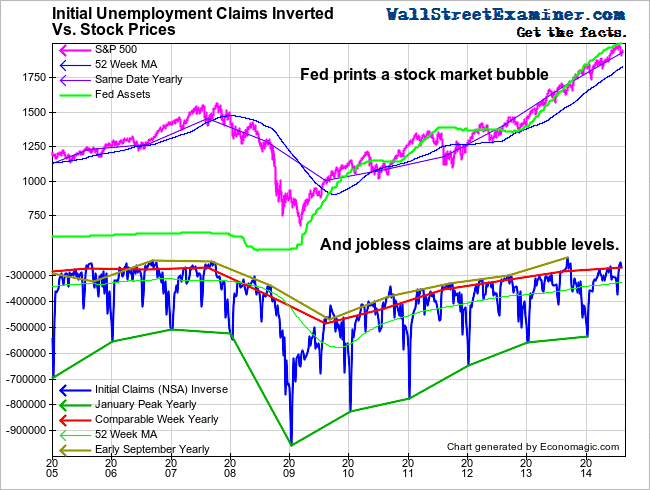 Thanks to their focus on the made up seasonally adjusted (SA) imaginary numbers, news media press release repeaters have given little indication that by historical standards the numbers have represented a danger sign. In recent weeks the headline writers finally recognized the record levels, but the media echo chamber presented that as positive, rather than the danger sign that it is.

Here are the actual numbers, along with the data showing why those numbers are so troubling. 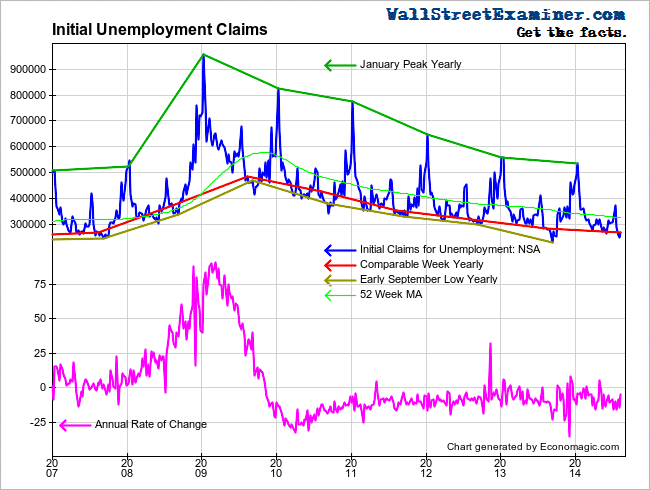 Actual initial unemployment claims were 4.9% lower than the same week a year ago. The normal range of the annual rate of change the past 3.5 years has mostly fluctuated between approximately -5% and -15%. The current number is at the weaker side of the bubble trend but it is still within trend norms.

While most weeks of the year almost always move in the same direction, the late July early August weeks have been swing weeks, sometimes increasing, sometimes decreasing. The current week fared poorly not only versus the average for this week but it was also comparatively even weaker than the comparable weeks of 2013 and 2012, both of which had declines of several thousand. That was evidence that the labor market was still improving in those weeks. In contrast, the current reading was the second worst performance for this week since 1998. One week does not a trend make or break, but it definitely should get our attention.

New claims were 1,939 per million workers counted in July nonfarm payrolls. This compares with 1,915 per million in this week of 2007, which was when the housing bubble was on the verge of collapse, and 1,881 per million in the comparable week of 2006, right at the top of the bubble. In September 2013, this figure set a record low. In each ensuing week the numbers remained at or near record levels. The figure for the week ended August 2 was an all time record low for that week, dating from the 1970s. Over the next several weeks we should find out if the current reading was the beginning of a trend away from those extremes and toward signaling a weakening economy. 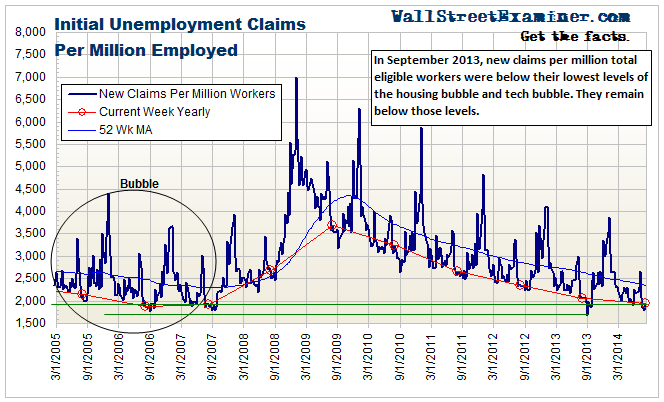 With record readings having persisted for 11 months, let’s just say that the actual numbers have given us fair warning that the Fed sponsored financial engineering bubble may not have much longer before it too begins to deflate. The numbers persisted at extreme levels at the tops of the last two bubbles for a year before the collapses got rolling. The foundations were already beginning to crumble by the time the first anniversary of record readings rolled around. Based on those standards, time is no longer the friend of the recent trend.