The headline, seasonally adjusted (not actual) number for initial unemployment claims for the third week of June was 312,000 (same as last week). The consensus guess of Wall Street conomists was for 310,000, a good guess. This seems benign enough, but the actual numbers, which the Wall Street captured media ignores, continue to show claims at the levels reached at the top of the housing/credit bubble in 2006. The current numbers suggest that the central bank

What do you think? driven financial engineering/credit bubble has reached a similarly dangerous juncture.

The headline number is seasonally adjusted, therefore fictional. It may or may not give an accurate impression of reality, depending on the week. The recent seasonally adjusted numbers, and the way the mainstream media reports the numbers, give little indication that by historical standards the numbers of firings and layoffs that lead to unemployment claims have been at record lows for several months. No one is ringing alarm bells about this. That’s standard practice in the media, but I haven’t even seen any independent bloggers raise this issue either. Perhaps a year or two from now they will look back and say, “The economy was overheated, but nobody saw it,” except for those of us who pay attention to the actual data, as opposed to the seasonally adjusted diversion that everyone is fixated on.+ 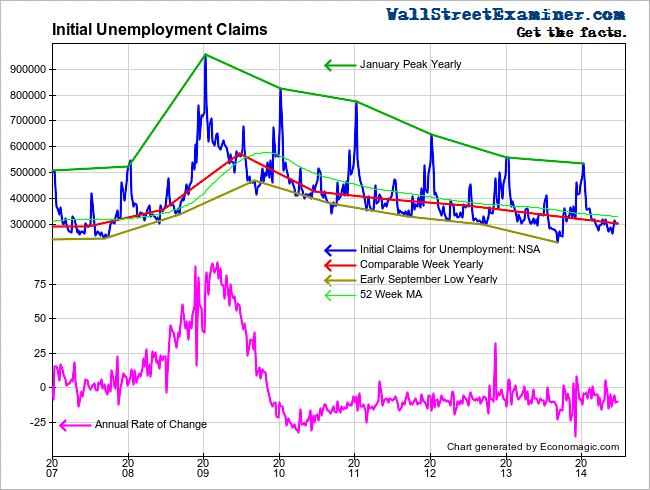 Actual initial unemployment claims were 9.7% lower than the same week a year ago. This is within the normal range of the annual rate of change the past 3.5 years, which has mostly fluctuated between -5% and -15%.+

While most weeks typically tilt the same direction each year, claims in the third week of June have gone both ways. No clear pattern is evident. The actual week to week change last week was an increase of 2,832. That was minimally weaker than the 10 year average for this week of -900 and the same week last year when claims rose virtually unchanged. There’s no sign of any change of trend in these numbers. The latest iteration of the Fed’s serial bubble economies marches on.+

New claims were 2,185 per million workers counted in May nonfarm payrolls. This compares with 2,167 per million in this week of June 2007 and 2,126 per million in June 2006, at the very top of the housing bubble. Previously, this figure had hit 17 year record lows for the month of May. 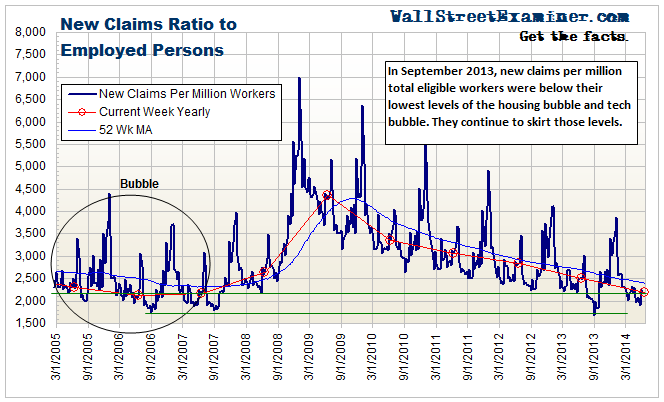 A soft economy with high unemployment, but where hardly any workers are laid off each week suggests that employers are holding on to the workers they have with the skill sets they need because they cannot find those skills in the enormous pool of unemployed workers. The labor market of those with needed skills is tight. The April surge in job openings supports that view. The surge in job openings far exceeded the gains in employment.+

Those without the needed skills have been marginalized into a US underclass of “untouchables” who cannot participate in, or importantly, help to drive, economic growth. Instead, they become an increasing drag on growth.+

In this regard, the financial bubble driven, distorted, maladjusted, top heavy US economy appears to be stretched to its limit. For an economy to maintain healthy growth it needs a growing population of workers who can afford to consume the goods and services the economy produces. Without that growth, stagnation is the best possible outcome. That’s the best case. With the number of workers who cannot participate in economic growth increasing either because they have no jobs or only jobs with low pay, economic implosion may be inevitable.+

Timing is the issue. We don’t use economic indicators for stock market timing. The markets themselves are their own best indicators. However, when the claims data begins to weaken from the current extremes, that should be a sign that the central bank driven financial engineering credit bubble has begun to deflate. 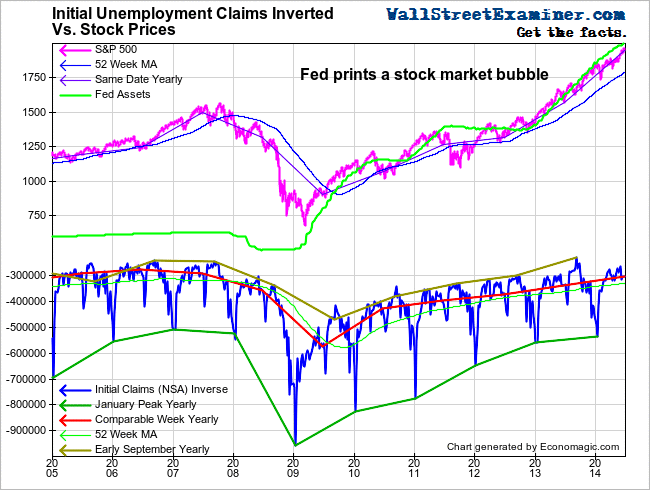 The Week Ahead: Is It Time for a Correction?