It is a remarkable fact that the labor share of income in the United States hovered in the range of 60-65% of total income for 50 years–but has declined since 2000 and seems to be still falling.

Roc Armenter explores how this figure is measured and some possible explanations for the recent change in “A Bit of a Miracle No More: The Decline of the Labor Share,” published in the Business Review from the Philadelphia Federal Reserve (Third Quarter 2015, pp. 1-7).

Armenter reminds us that in the construction of income statistics:

“Every dollar of income earned by U.S. households can be classified as either labor earnings — wages and other forms of compensation — or capital earnings — interest or dividend payments and rent.”

Here’s the basic pattern of the falling share of labor income: 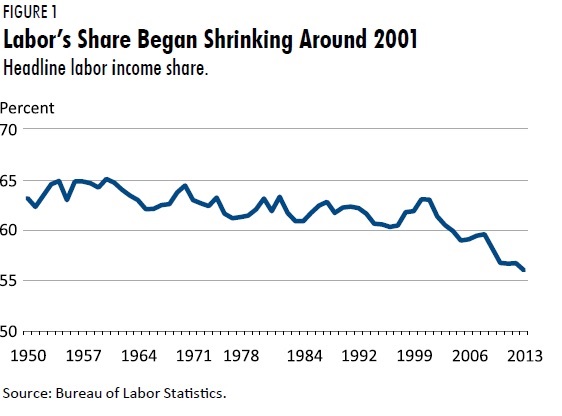 One possible explanation for this change involves alterations in how the statistics for labor and capital income are calculated over time. The single biggest factor here appears to be a change in how the income of self-employed workers is treated. The official statistics divide up their income as if the person was working a certain number of hours for pay, which is counted as “labor income,” while the rest of their income is “capital income” due to ownership of capital in the form of their business. But the way in which the Bureau of Labor Statistics does this division changed back in 2001. Armenter explains:

Before thinking about why the labor share has fallen, it’s worth thinking about the remarkable fact that it didn’t change for such a long time. After all, the period from 1950-2000 sees a rise in the share of workers in service industry jobs, along with enormous growth in industries like health care and financial services. Surely, all of this should be expected to alter the labor share of income in one way or another?

Back in 1939, John Maynard Keynes wrote an article (“Relative Movements of Real Wages and Output,” Economic Journal, 49: 34–51) pointing out that the division between labor and capital income appeared to have been the same for the preceding 20 years in the data available to him. He points out five separate factors that should have been affecting the shares of labor and capital over time, and notes that apparently the changes in these factors are almost exactly offsetting each other, He characterized these closely offsetting effects as “a bit of a miracle“–a phrase that Armenter uses in the title of his article. The minor miracle of a roughly stable labor share of income for several decades after 1950 arises from its own array of offsetting changes in industries and in labor share of industries, Armenter explains (footnotes omitted):

The reader would not be surprised to learn that different sectors use labor and capital in different proportions. In 1950, the manufacturing sector averaged a labor share of 62 percent, with some subsectors having even higher labor shares, such as durable goods manufacturing, with a labor share of 77 percent. Services instead relied more on capital and thus had lower labor shares: an average of 48 percent. Thus, from 1950 to 1987, the sector with a high labor share (manufacturing) was cut in half, while the sector with a low labor share (services) doubled. The aggregate labor share is, naturally, the weighted average across these sectors. Therefore, we would have expected the aggregate labor share to fall. But as we already know, it did not. The reason is that, coincidentally with the shift from manufacturing to services, the labor share of the service sector rose sharply, from 48 percent in 1950 to 56 percent in 1987. Education and health services went from labor shares around 50 percent to the highest values in the whole economy, close to 84 percent. In manufacturing, the labor share was substantially more stable, increasing by less than 2 percentage points over the period. And this is the “bit of a miracle” — that the forces affecting the labor share across and within sectors just happened to cancel each other out over a period of almost half a century. 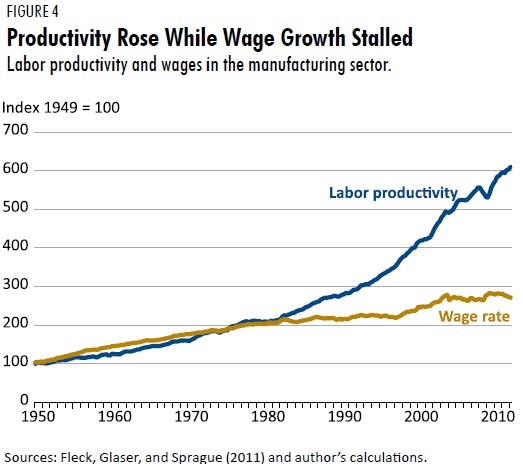 This divergence between manufacturing productivity and wages started back in the 1980s, which seems a little early to match the timeline of the decline in labor share starting in 2000. However, one can cobble together a story in which the decline in labor share started in the late 1980s, was interrupted for a time by the white-hot and unsustainable labor market conditions during the dot-com boom of the late 1990s, and then continued on its path of decline.

What caused the decline in labor share? Armenter runs through some possible explanations, while emphasizing that none of them are complete. For example, a “capital deepening” explanation holds that there is more capital in US manufacturing, which could explain lower income shares in manufacturing–but doesn’t explain why wages in manufacturing stopped keeping up with productivity increases. A globalization explanation might help to explain this shift if the US was tending to import goods in industries that had high labor share and to export goods in industries with a lower labor share. But this factor doesn’t seem able to explain the observed shift. as Armenter explains:


An explanation not explicitly considered by Armenter, although it is in the spirit of the other explanations, comes from the work of Susan Houseman. She argues that most of what looks like productivity growth in manufacturing isn’t about workers actually producing more, but is because computers have ever-greater capabilities–which the government statisticians measure as productivity growth. She also argues that there is a shift within the manufacturing sector toward importing less expensive inputs to production, which looks like a gain in productivity (that is, fewer inputs needed to produce a given level of output), but is really just cheaper imports of production inputs.

In the spirit of half-full, half-empty analysis, I suppose the positive side of this analysis is that the drop in the share of US labor income is focused on only one part of the economy, and it’s a part of the economy–manufacturing, which employs less than 10% of the US workforce (12.3 million jobs in manufacturing, compared to 148 million jobs in the entire US economy). Of course, the half-empty side is that no matter what the reason why the minor miracle of a fairly stable labor share has changed, it has in fact changed–and in a way that tends to disadvantage those who receive their income through labor.

For some earlier posts on the falling share of labor income, both from a US and an international point of view, see: