Economy Gets JOLTS But What’s Wrong With This Picture?

The BLS’s Job Openings and Labor Turnover survey is reportedly Janet Yellen’s favorite indicator. Yesterday the news reports on job openings in June were all crazy bullish. And it’s no wonder. Posted job openings really are soaring. May and June both rose by 19% year to year. A 19% year to year increase is nothing to sneeze at. It’s the hottest growth since May 2012. June job openings exceeded the number of openings in June 2006, at the peak of the housing bubble. The numbers should encourage Mrs. Akerloff to continue to gradually remove the Fed’s stimulus. Here’s what the data looks like.

But alas, the devil is in the details, as always. The first issue is that there are millions more workers today than in 2007, so that, while job openings have grown to peak bubble levels, there’s been a greater increase in potential workers. On that basis, there’s no new record in job openings.

With the workforce growing faster than job openings, there still aren’t enough openings to employ all those willing to work. At the same time, the number of openings per million of total population is at a higher level than at the top of the housing bubble in 2006. [Note: I use total population as the basis for the ratio because the government manipulates the labor force numbers by subjectively defining millions out of the labor force.] 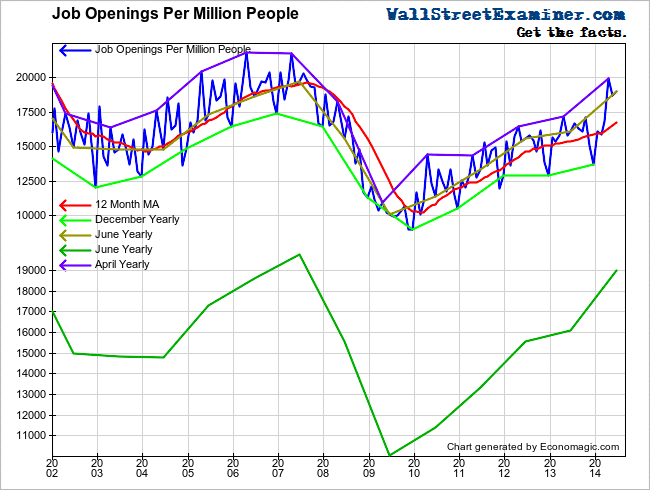 A bigger problem lies in the new hiring data. The BLS counts new hires throughout the month and reports the total for the month at the end of the month. And new hires did indeed surge in June, but they remain BELOW the level of 2004. They have barely exceeded the June 2002 level, which was during the pits of a recession.

Looking at it another way, after 5 years of recovery, and a rip-roaring hiring boom in the past 12 months, hiring has only recovered to the level of the 2002 recession low. These numbers are totals, not relative to the growth of the work force. 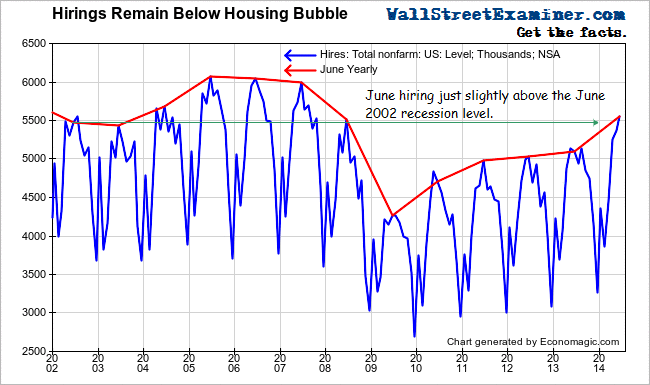 The picture is even more stark on the basis of hirings per million people. That remains well below the 2002-03 recession bottom level even after the massive surge this year. 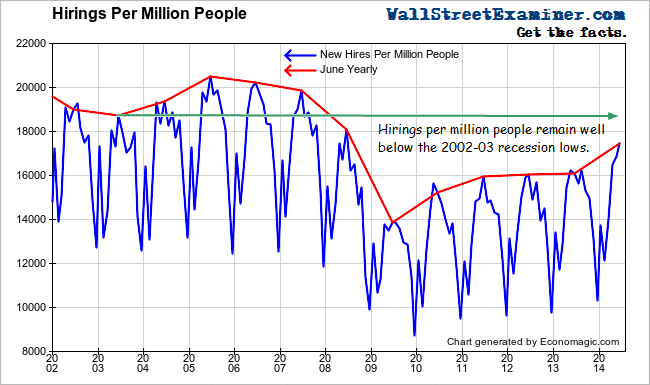 Because hires are counted throughout the month and job openings are only counted at the end of the month, there are virtually always more hires than job openings in the BLS’s monthly data. The number of monthly hires relative to the number of end of month openings has fluctuated between roughly .95 to over 1.8. It’s usually between 1.20 and 1.60. The only time prior to the last couple of years that it was below 1.20 was during the housing bubble.

I believe that the trend is instructive. The ratio of hires to openings peaked at the recession low in 2009 because there were so few openings and plenty of qualified workers available to fill them. But since then, that ratio has been steadily declining. The June reading of 1.18 was the lowest level for June in the history of the data, which began in 2001. 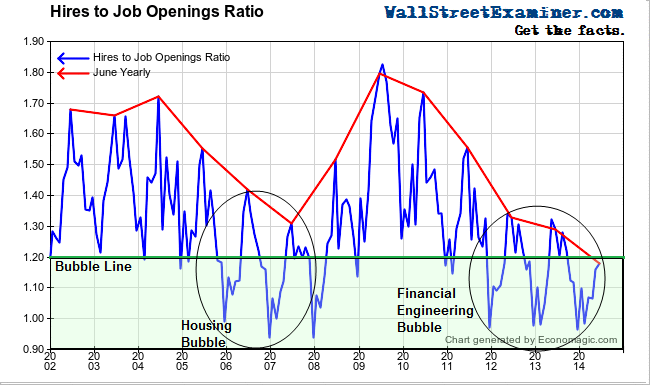 That shows that in spite of skyrocketing job openings, those jobs are not the kinds of jobs that real people, with their existing levels of skills, can fill, nor can they ever fill. There just aren’t that many rocket scientists and financial engineers available in the work force. Yes, that’s sarcasm. The biggest increase in openings has been in low paid restaurant and hotel jobs, which is just as much a problem. The US economy is beset with a huge, multi directional skills mismatch.

As the housing bubble was beginning to deflate in 2007, but before employers realized it, this ratio had dropped to a low of 1.3. Today, as the central bank driven asset and financial engineering bubbles scream to a climax, the hiring to openings ratio is at an all time record low. In my view, that speaks to just how dangerously distorted the current US economy is.

Rather than seeing distortion and unsustainable extremes, the Fed and the majority of Wall Street’s captured pundits see this and other similar data as signs of the economy reaching “escape velocity.” The Fed will be encouraged to continue to withdraw the monetary amphetamine injections that have sustained this behavior, and the Fed’s cheerleaders will conclude that the economy has gained enough strength to continue on its crazy, hyperactive way.

We’ve seen this process before many times in the past 100 years and as recently as 2000 and 2007, but never from the kinds of extremes we have reached today. Who knows what the outcome will be?

Hard Evidence: Are Migrants Good for the Economy?

Newsflash: Everyone Shops Online These Days!

Newsflash: Everyone Shops Online These Days!