The behavior of initial unemployment claims is similar to its behavior at the top of the housing bubble in 2006. This is a warning that a top heavy, distorted, and maladjusted US economy, driven by financial engineering enabled by the Fed’s two headed monster of ZIRP and QE, is stretched to its unnatural limits.

Initial Unemployment Claims At Record May Lows – Click to enlarge

Initial unemployment claims were 5.8% lower than the same week a year ago. This is within the range of the annual rate of change the past 3.5 years which has mostly fluctuated between -5% and -15%.

The seasonally adjusted headline number was 326,000. According to one major survey, the consensus of Wall Street economists was for a gain of 320,000. The seasonally adjusted number is a fictitious number made up to smooth the trend to account for seasonal differences. While these numbers are a representation of the trend, they sometimes give false impressions. The slight “miss” this week could be misleading, since the actual number was right on trend.

Regardless of whether the headline print accurately represents the reality or not, the market reacts to that headline print, not the actual trend. While this data is not a market trend driver, it is of interest as a potential early warning indicator that the stock market trend is not consistent with the trend of the economy. It can alert us to bubble behavior in the markets.

The actual weekly change of an increase of +16,000 was worse than the 10 year average for this week of a decline of 10,000. In the third May weekly reading last year the week to week change was a drop of 17,000. The current reading was significantly weaker in comparison. This may simply be a giveback from the previous week’s stronger than average performance. However, I checked back to 1998 and this performance was the worst for this week in at least the past 17 years.

That may be because the recent weekly total number of claims have been “as good as it gets.” The current weekly number was at the strongest level since this week of May in 2007. New claims were 2,218 per million employed workers counted in nonfarm payrolls in May. That is the best since the May 2007 reading of 2,090 per million workers as the economy was just about to collapse. At the end of the housing bubble in May 2006, the rate was just 2,180 per million. By this standard, the economy appears to be stretched to its limit. 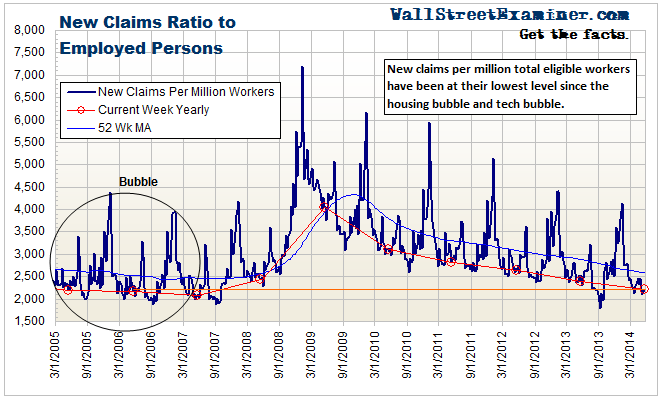 While stocks have run away in a Fed printed bubble under QE3-4 the pattern of unemployment claims looks like it did in 2006 just as the housing bubble peaked. The similarity of the current pattern should a clear warning that the Fed has pushed the economy to the breaking point in the current financial engineering bubble.

Did the Internet Prevent All Invention from Moving to One Place?

Did the Internet Prevent All Invention from Moving to One Place?