Can Money Printing Cause Deflation?

We know that “money printing” distorts the level of relative prices in an economy because, at certain times, some prices may increase faster than other prices. At other times, during another phase of monetary inflation, the prices of different goods, services and assets may increase while formerly rising prices might decline — if not in absolute terms, then in relative terms (commodity prices in the last few years).

Over the last 45 years I have observed that, in countries with high monetary inflation, real wages and incomes have tended to decline. Incidentally, this has also been the case since the turn of the millennium in the US, a period in which there has been a colossal expansion of money and credit. 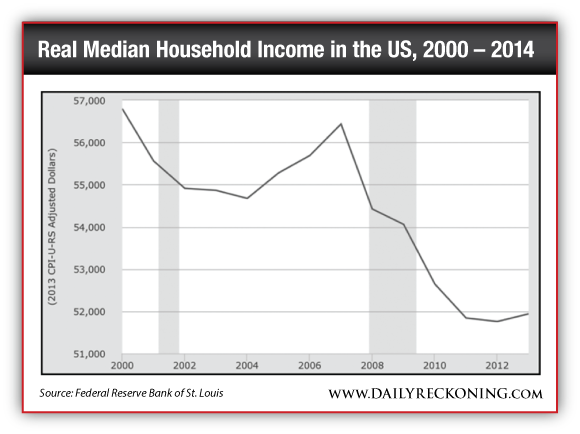 During the great Weimar monetary inflation, real wages fell by about 50% from their pre-First World War level. Constantino Bresciani-Turroni (The Economics of Inflation, 1931) noted that the inflation influenced wages in different ways at different stages of the depreciation of the mark.

Until the summer of 1922 the principal effects were as follows:

(a) The increase in nominal wages was slower than the increase in prices caused by the monetary inflation. In other words real wages fell.

Bresciani-Turroni further wrote that commercial papers at the end of 1921 and 1922 showed intense activity in many industries, and in particular in those producing exports and production goods. “In that period real wages fell appreciably. The real wages of miners, which in the middle of 1921 were about 90% of the pre-war level, were scarcely 50% to 60% of the same at the end of 1922.”

Bresciani-Turroni then quoted some statistical studies, which suggested that:

“towards the end of 1922 real wages were, in the industries studied by the author, less than the subsistence minimum.”

As an example, in dyeing the percentage had declined from 36.9% to 27%. In the US, in recent years, wages and salaries have declined as a percentage of GDP while corporate profits are at an all-time high. As John Maynard Keynes opined, “It has long been recognized, by the business world and by economists alike, that a period of rising prices acts as a stimulus to enterprise and is beneficial to business men” (but not to the working class).

When, in the 1980s, I travelled frequently to Latin America I noticed that whereas most countries in the region were experiencing extremely high rates of monetary inflation and, therefore, rapidly depreciating currencies, real wages had collapsed. The result was that the high monetary inflation that Latin American central banks had created with the intention of stimulating economic activity was, instead, depressing incomes and, therefore, consumption and capital investments — in short, the entire economy. 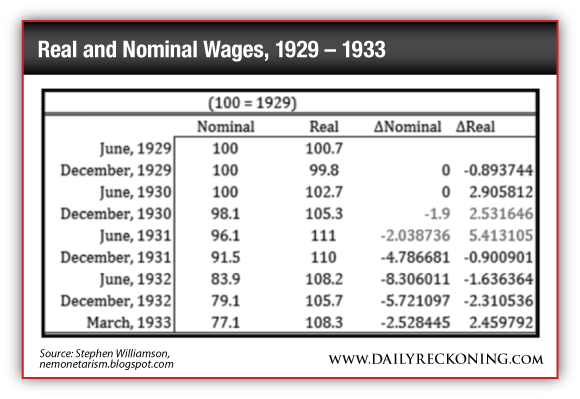 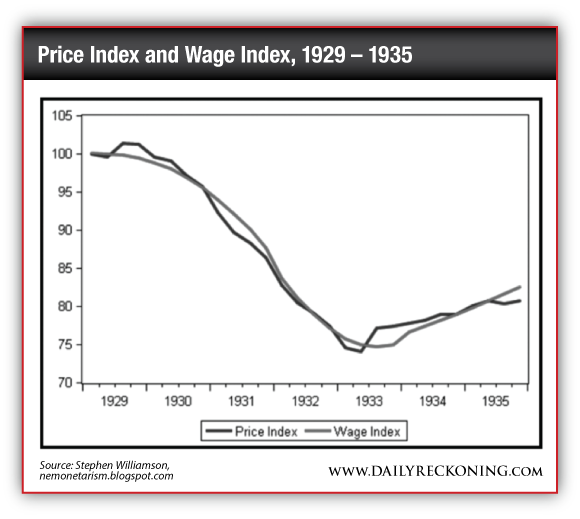 I know that some people will immediately say: Yes, real wages during the Depression were sticky and didn’t decline, which problem led to very high unemployment. However, several economic papers have pointed out that there is no clear evidence that movement in real wages affects employment losses in any perceptible way.

This was also the case after 1989 in Japan, which had rising real per capita income gains while unemployment didn’t move up meaningfully. What is interesting to observe is the difference in the performance of real incomes in Japan post-1989 and since the introduction of Abenomics in early 2013.

Furthermore, I should point out that since 2011, the Yen has lost almost 50% of its value against the US dollar. In other words, in US dollar terms, Japanese households are now close to 50% poorer than three years ago. Over the same period of time, in dollar terms, the Japanese economy has contracted by a similar amount. What a great “success” Abenomics has been!

Naturally, the proponents of Abenomics and of Kuroda’s “courageous” (more likely “insane”) monetary policies will argue that the equity market has risen strongly since 2011. Yes, this is correct and we wrote favourably about Japanese stocks on several occasions in 2012 and 2013. 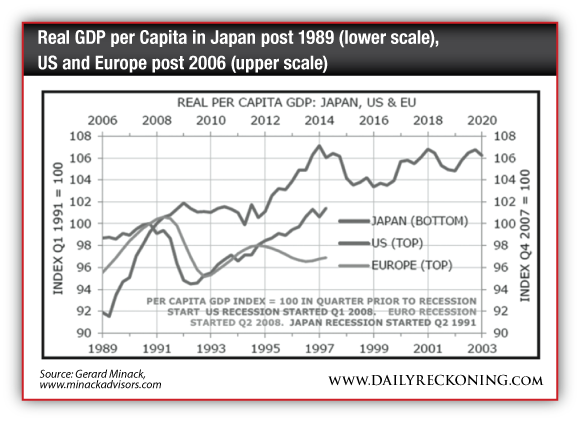 However, the problem for Japanese households is that they have only a very limited exposure to Japanese equities (only about 15% of financial assets); therefore, they benefit little from rising stock prices.

But the point I wish to make is that in the case of Japan the expansionary monetary policies of the Bank of Japan have not led to high domestic inflation but, rather, to a huge economic deflation in dollar terms. As an aside, during the period of high inflation in Latin America in the 1980s, I observed that while there was high inflation in domestic consumer prices, there was a complete collapse in the price level of consumer prices, and especially of domestic assets in dollar terms, because the decline in the value of Latin American currencies exceeded the rise in domestic prices.

Now, we need to ask ourselves why, in the current economic expansion, consumer price increases around the world have remained relatively muted (albeit far higher than official government statistics show) and why economies have failed to gain much traction despite highly expansionary monetary policies.

The simple answer is that the velocity of money has collapsed.

But why has the velocity of money collapsed?

The academic explanation is that, as Robert Auerbach (an economist with the US House of Representatives’ Financial Services Committee for 11 years) pointed out in 2013:

There is a massive misconception about where the Bernanke Fed’s stimulus landed. Although the Bernanke Fed has disbursed $2.284 trillion in new money (the monetary base) since August 1, 2008, one month before the 2008 financial crisis, 81.5 percent now sits idle as excess reserves in private banks.

Auerbach points out that previously “banks did not leave money idle in excess reserves at zero interest because they were investing in income earning assets, including loans to consumers and businesses.”

This 81.5 percent explosion in idle excess reserves means that the Bernanke Fed’s new money issues of $85 billion each month have never been a big stimulus. Approximately 81.5 percent (or $69.27 billion) is either bought by banks or deposited into banks where it sits idle as excess reserves.

The rest of the $85 billion, approximately 18.5 percent (or $15.72 billion), continues to circulate or is held as required reserves on banks’ deposit accounts (unlike unrequired excess reserves).

The official explanation as to why banks keep their funds in the form of excess reserves instead of lending them out is that the Fed has been paying big banks high-enough interest on the funds which they deposit at the Fed to discourage them from making loans.

You don’t need a Ph.D. economist to know that if you pay banks 1⁄4 percent risk free interest to hold reserves that they can obtain at near zero interest, that would be an incentive to hold the reserves.

Along the same lines, William T. Gavin, an economist at the St Louis Federal Reserve, wrote in its March/April 2009 publication: “First, for the individual bank, the risk-free rate of 1⁄4 percent must be the bank’s perception of its best investment opportunity.”

Frankly, I find it difficult to believe that banks didn’t hold any significant reserve balances with the Fed until recently and then, bingo, that all changed when the Fed started paying 1⁄4% interest. Surely, banks should find better opportunities by “investing in income-earning assets, including loans to consumers and businesses”, rather than leave “money idle in excess reserves” at 1⁄4% interest.

A more likely explanation is that the economy is still weak, with those people who want to borrow money having no access to additional credit, while those who can borrow money are already loaded with cash and don’t need any additional funds.

More importantly, in the same way that banks are holding excess reserves at the Fed instead of lending to businesses, corporations and wealthy individuals prefer to play the capital markets or to invest in existing assets, rather than invest in new businesses.

I am aware that this is a very simplistic view, but my point is that all the liquidity that central banks have created isn’t flowing into the real economy but remains in asset markets (mostly financial markets) buying and selling currencies, bonds, stocks, real estate, art, entire companies, etc. For example, most corporations find it more advantageous to buy back their own shares (in order to boost their share prices) instead of investing in new plant and equipment. (In 2014, S&P 500 companies will spend almost 60% of their profit on share buybacks.)

Or take wealthy individuals as another example. Most of them invest in stocks, bonds, funds or real estate; very few of them go out and build businesses. Private equity funds do the same: instead of building new businesses, they tend to buy existing assets.

In fact, I would argue that central banks’ monetary policies have been too successful at boosting asset markets; because of this, they have been a complete failure at maximising the level of national income for the majority of people and at providing sustainable economic growth that would raise the standard of living of the majority of participants in the economy. Furthermore, the current global macroeconomic conditions remind me of the high-tech, media and telecommunication boom of the late 1990s, which ended in March 2000. As long as tech stocks moved up, investors showed very little or no interest in investing in old-economy companies, real estate and commodities.

The high-tech boom sucked in all the liquidity at the expense of other sectors of the economy. Now, we have the high-tech boom of the late 1990s magnified manifold, in the sense that global asset markets (with very few exceptions) have become hugely inflated and are attracting liquidity which, under stable monetary conditions, would have flown into real capital investments. In other words, central banks have been hugely successful at boosting asset markets while deflating real economic activity.

The mid-November Christie’s contemporary art sale in New York brought in the highest-ever total for an auction, grossing $852.9 million across 75 lots. The previous record for an auction was $745 million, which was set back in May, also at Christie’s contemporary art auction in New York. At the same time, real median incomes are probably deflating at a faster pace than official statistics show because the cost of living is rising far more rapidly than incomes.

So, going back to my original question of whether, under certain conditions, the expansion of central banks’ balance sheets and policies of zero interest rates could actually have a deflationary impact, I believe that as long as savings and newly created fiat money flow into booming and speculative asset markets, real economic activity will remain depressed. A good example of this phenomenon is the housing market.

Home prices have recovered, though irregularly, and the rise has made the purchase of a home unaffordable for a large segment of the population. Otherwise, how can we explain the steep decline in the homeownership rate? In the meantime, the residential vacancy rate is extremely low by historical standards, which means that rental prices will likely continue to move up and squeeze the real incomes of the growing cohort of young tenants who can no longer afford to buy a house or a condo.

However, as Irving Fisher opined,

“If all asset prices and incomes rose evenly no harm would be done to anyone. But the rise is not equal. Many lose and some gain.”

Market Commentary: Markets Close Down Fractionally On A Quiet Session

Five Reasons Why Some Countries are so Lax at Regulating Smoking

Five Reasons Why Some Countries are so Lax at Regulating Smoking