An Insane Idea: The US Economy is Overheating

One of the off-the-wall theories that I have espoused lately is that rather than slowing because of the winter weather, the US economy is actually beginning to overheat as it enters the final stages of a free money boom that has benefited the few at the expense of the many.

Most observers with whom I’ve shared this thought, think that I’m nuts, and I agree. But I’ve been watching the Federal withholding tax collections literally going off the charts for a couple of weeks, and based on that it sure looks to me like the US economy is beginning to go into blowoff mode. Sure, only the 1%, or maybe 10%, are participating, but the people who run this show have gambled that the bottom 90% doesn’t matter and they’ve driven policy accordingly.

Withheld taxes are mostly from employee wages, salaries, commissions, and bonuses. Withholding from other sources like financial backup withholding is typically negligible in the big picture. So this trend should give us a pretty good idea in real time of just how fast the US economy is growing in nominal terms, which includes an unknown inflation component. Lop off about 2% for CPI, and you can even back into a CPI adjusted real growth rate that often gives a good idea of what the subsequently released lagging GDP numbers, and a whole host of other economic data will be. 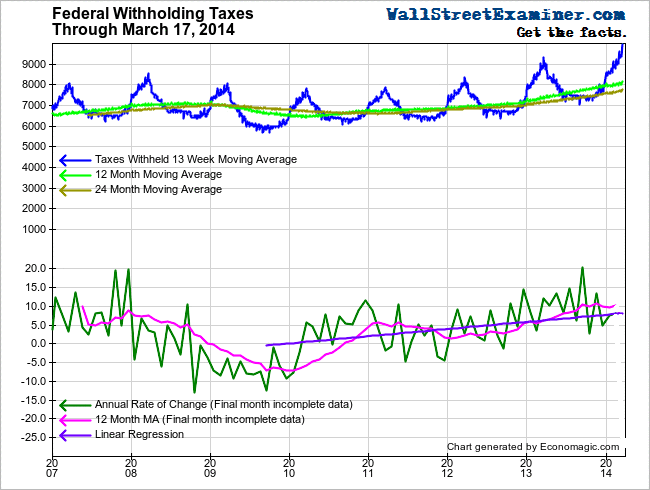 Are Withholding Taxes Signaling A Crackup Boom? Click to enlarge

Federal withholding tax collections have been going through the roof in recent weeks. Not only that, but the year over year rate of increase has accelerated from zero to 7.5% in nominal terms since the recession bottomed in 2009. That’s amazing considering that the recovery has been under way for five years. The year over year calculations in 2010 were against the extremely weak 2009 numbers. Tax cuts suppressed the growth rate in 2011, but the payroll tax increase restored those cuts in 2013. The 2014 year to year comparison is now against a period when those taxes were fully restored, and still the gains are as strong as in 2010. Something is going on here that no one in the mainstream economic establishment is talking about–acceleration. I guess it’s either too early, or too unbelievable, given the conventional wisdom that the growth rate is soft.

I am not an economist (nor a used car salesman). I just observe and report. In nearly 50 years of charting various trends I have observed that a parabolic rise on any chart, whether it be of stock prices, commodities, or house prices, tends to end very badly. Why shouldn’t the same be true of economic data? An accelerating rate of increase of any economic series in a nation where population growth is around 1% per year, seems neither normal nor sustainable. Here we have a linear regression showing growth at 7.5%, and a 12 month moving average showing 10%! Ask yourself, who is the source of all these gains? Certainly not the bulk of the American people.

The chart of the S&P 500 which I posted alongside the Industrial Production Index yesterday is in a parabolic curve as it runs away from the growth rate of industrial production. And here we see it in withholding tax collections. In both cases, the benefits are accruing to just a tiny slice of the population as a whole. It is unbalanced and therefore unstable.

Unlike Wall Street and academic economists who pretend to know but don’t, I don’t profess to know how fast the US economy can expand without going off the rails. This economy is wildly distorted by the endemic speculation that the Fed’s free printed money QE spree has enabled, promoted, and encourages. It’s an economy that’s distorted, top heavy, and out of balance as the vast majority of economic actors–the American people at large–fail to participate in the gains. No matter how slow or fast the growth rate, if the majority is falling farther and farther behind as those at the top grow wealthier, then the “growth” we see in the total numbers is unsustainable. The round robin of wild speculation and excess consumption by the few cannot continue indefinitely if new players are not provided the wherewithal to enter the game.

At the same time, as the lagging economic data releases begin to reflect the faster growth rate that is already occurring, the Fed will be encouraged to tap the brakes, just as it has been doing in recent months, even though the majority are seeing no benefit from the apparent gains. That tapping of the brakes in an unstable, unbalanced system, will lead to its toppling. It doesn’t require an outright tightening. It only requires yet another behind the curve, befuddled miscalculation in the Fed’s history of generational serial blunders in a 100 year trial and error experiment in economic manipulation through monetary policy.

I track the real time withholding tax data for you every week in the Professional Edition Treasury updates.

Keep track of the insanity of the Fed, Primary Dealers, the US Treasury, other central banks and a whole cast of nefarious characters as they drive markets in the Wall Street Examiner Professional Edition Fed Report and Treasury update. Try the Professional Edition risk free for 30 days!

Why Gold Prices Fell to Three-Week Lows After FOMC Meeting